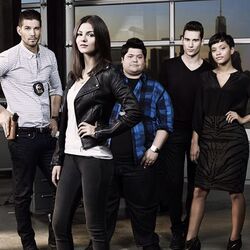 The 1st season of Eye Candy, an American thriller television series that premiered in the United States on the January 12th, 2015 on MTV. Production began on September 15, 2014, and ended on December 20, 2014.

The series follows Lindy, a beautiful tech genius who begins online dating and begins to suspect that one of her mysterious suitors might be a deadly cyber stalker. When her friends at the cyber police uncover a potential serial killer in Manhattan, all signs point to one of Lindy's dates. Teaming up with this band of hackers, Lindy works to solve murders while unleashing her own style of justice on the streets of Brooklyn, New York.

Retrieved from "https://eye-candy.fandom.com/wiki/Season_1?oldid=5667"
Community content is available under CC-BY-SA unless otherwise noted.